Overwatch level borders is a system that allows a player to have a glance at another player’s whole career profile in-game. This feature helps you to get a hint of teammates and opponents with whom you are playing overwatch. Since its launch in  2016, overwatch has taken the FPS arena with surprise.

The FPS-focused game is quite a bit more than a plain FPS game. The game is also described as a “hero shooter” by its makers, as you get a wide pool of heroes to pick from and battle in a party of 6 with the opponent’s party having the same numbers. The player base of the game has increased dramatically over the years and Blizzard Entertainment is cashing well on its success.

With the Overwatch level borders feature, you can easily get a glance at a player’s whole overwatch career. This includes, how many matches the player has won? how much effort do they put? how skilled they are? among various other details.

In this article, we will tell you all that you need to know about the overwatch level borders and we will also tell you how you can get one for yourself so that others might have a look at your overwatch career at a glance too.

What are Overwatch Level Borders?

Every game has its own system and mechanism of segregation of players. With this, they also allocate them with medals or ranks which they can add up on their profile to show their skill level of the game to teammates and opponents. In simple terms, the Overwatch level borders are a layout to display a player’s prestige of overwatch.

Getting a border in overwatch is totally up to you. Depending on your skill and ability to play the game you will get a border. When you first start playing Overwatch you are awarded a  Bronze portrait. Now every time you cross 100 levels a star gets added to your profile and the counter resets to 1. On average a good player would require 35-40 hours of gameplay to earn 100 levels.

Additionally, you need as many as 5 stars in each bracket to advance to the next and higher one. So only when you have earned a 5 start on a bronze portrait you will be promoted to a  silver one. This system does not change no matter which portrait you are on. However, you will see your border getting slightly bigger for every 10 levels that you gain. It does look much more appealing. 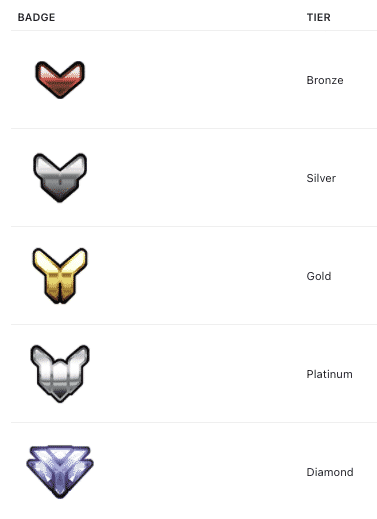 The best part about climbing up the ladders of the level borders is that you get to play with more skilled players and in a more competitive scenario. Also, the higher you are in the bracket the more respect you will have from the fellow gamers, as they will most likely respect your experience.

Just be wary of rumors, as many will tell you that your status can reset and other in-game materials lost. But, all you have is to gain, while ranking up. You do not lose anything while ranking up your level borders in Overwatch.

Locating your and other people’s overwatch level borders:

As we told you, a border is a portrait that you will see around every player in the game. If you wish to see the border of a player in-game you can find the character they have chosen in the form of a colorful portrait varying from bronze to silver, gold, platinum, or diamond.

However, the game allows you to view your own as well as other player’s portraits in-game as well as in the main menu. To check your portrait and level border, you have to just follow a few simple steps.

To find the level border of people, you will have to put in some effort. The annoying part about Overwatch is that it does not allow you to search for players using their gamer tags in-game. So, to check out the level borders on players who are non-friends, the only option you have to look for is their gamer tag in the menu that shows the portraits of the recent players you played with. You will find this option in the social menu of Overwatch.

Experience, Exp, or XP are all the same things that represent your current status on how much and for how long you have been playing the game. There are many ways to earn exp in overwatch. But the best and most normal way is by playing the game. No matter if you win or you lose, for every game that you join, you are awarded some experience points based on the duration for which you lasted in the game in best PC.

Once you have joined the game doing anything will earn experience for you. Experience allows you to level up and hence get a higher level border linked to your profile. 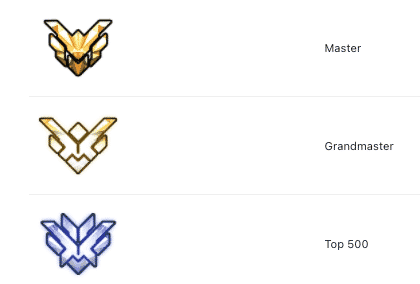 Here are the ways through which you can earn exp in overwatch:

The highest Level border in Overwatch

The highest level border that a player can earn in overwatch is Diamond 5 Star. At 2800 level you earn this border and the border is maxed out then. However, there is no cap on the experience level that you earn post this. Leveling up post diamond 5 stars earns you good gifts, however, you won’t see any changes in your profile.

Types of Level borders in Overwatch

There are 5 main types of level borders in Overwatch. Each level is divided into a section of 5 stars. A player has to gain 100 levels to level up 1 star at every level. Meaning, that when you get 100 levels you will earn an additional star to your current level. However, if you are maxed out in a level (if you already have 5 stars and you gain another 100 level), then your border rank will upgrade.

The Five main level borders that Overwatch features are:

This will be part of your profile when your levels are between 700-1299. Just like the bronze, you will earn a start at every 100 levels, and at every 10 levels, your border will advance a bit. The advancement will reset once you earn a start and move on to earn the next one.

This level border will start once you have completed the silver tier. You will be part of this bracket when you are in between 1300-1899. Just like bronze and silver, you will proceed in the same manner. However, leveling up would now get a bit competitive.

This is the second-best tier and you will notice the skill of players enhancing with every start that you gain at this level. This tier has a bracket of levels ranging from 1900-2499. Once you cross this tier, you will advance to the Diamond.

This is the highest Border level that an Overwatch player can earn. However, when you reach this tier the competition gets very tough. Your games need to be good if you wish to earn stars in this tier. You get into this when you earn 2501 level and max out with 5 stars at 2901 level.

Is Overwatch Level border the right parameter to judge how good a player is in the game?

From what the oldest, most prominent and professionals players believe, the straightforward answer to this question is no. You might match up with players who have better knowledge of the game at a higher level, but this certainly ensures that they are skilled at the gameplay.

Understandably, players who have invested thousands of hours playing a game will know it much better. But skill at a game is totally different and depends on how quick you are with your reactions in-game and how cunningly you play it.

For your gaming skill, you will like reading – Best White Motherboards in 2021

It’s time for you to allow us to go fetch some more information for you on other gaming topics. We hope that we were able to tell you about all overwatch border levels in detail and how they function.

If you have any queries related to it feel free to post them in the comments sections below. For, enhancing your gaming-related knowledge and learning exclusive working tips and tricks for a better gaming experience, keep surfing our website.