Best Motherboard for Ryzen 9 3900x: Finally, the wait for the PC fanatics is over. The Ryzen 3000 series processors, including the 3900x, are now widely available in retail stores across the country.

This gives the PC building and upgrading enthusiasts to finally get their hands on their highly anticipated Zen 2 builds. The AMD Ryzen 9 3900x is being presented as the high-end enthusiast-level offering by them.

The processor has been depicted with very impressive performance and benchmarks on paper. Also, AMD launched this product to counter against the very famous Intel Core 9 9900k and  i9-9900KS processor that launched back in 2019.

Today, in this article, we will be telling you about the best motherboard for Ryzen 9 3900x with an overview of each one of them including different form factors like  ATX, Mini-ITX, and micro-ATX based motherboards, overclocking performances, and budget.

To build a PC around the Ryzen 9 3900x, it must be made certain that you get the absolute most performance out of this Zen 2, 7nm top-end processor from AMD. And to achieve this performance feat from this CPU, you need to pair it with the right set of complementary components.

So, you need to make sure that you have the right set of coolers, chipsets, Visual support, wiring, ports, etc.

All this will depend on the motherboard that you pick to pair with this gladiator of processors.

According to the experts, with the right sets of CPU coolers, with an X570 motherboard loaded with a decent VRAM and an optimized RAM for Ryzen (B-die), optimal power supply, with a good airly cabinet would do wonders to the output that you get.

To understand a motherboard better you must be fully aware of all the functionalities that it has. So, in order to provide better insight, we have done a detailed overview of each motherboard present in our top 5 list for the AMD Ryzen 9 3900X processor.

Let’s have a look at the overview of each one of them:

The Gigabyte X570 AORUS XTREME is undoubtedly the best among all the X570 boards released so far. This X570 motherboard is not only the best-looking motherboard in the market but also has one of the most overkill VRM supported by a solid heatsink.

This Gigabyte mainboard features a  true 14-phase design, the first in any motherboard till now. It also has a 70A smart power stage. 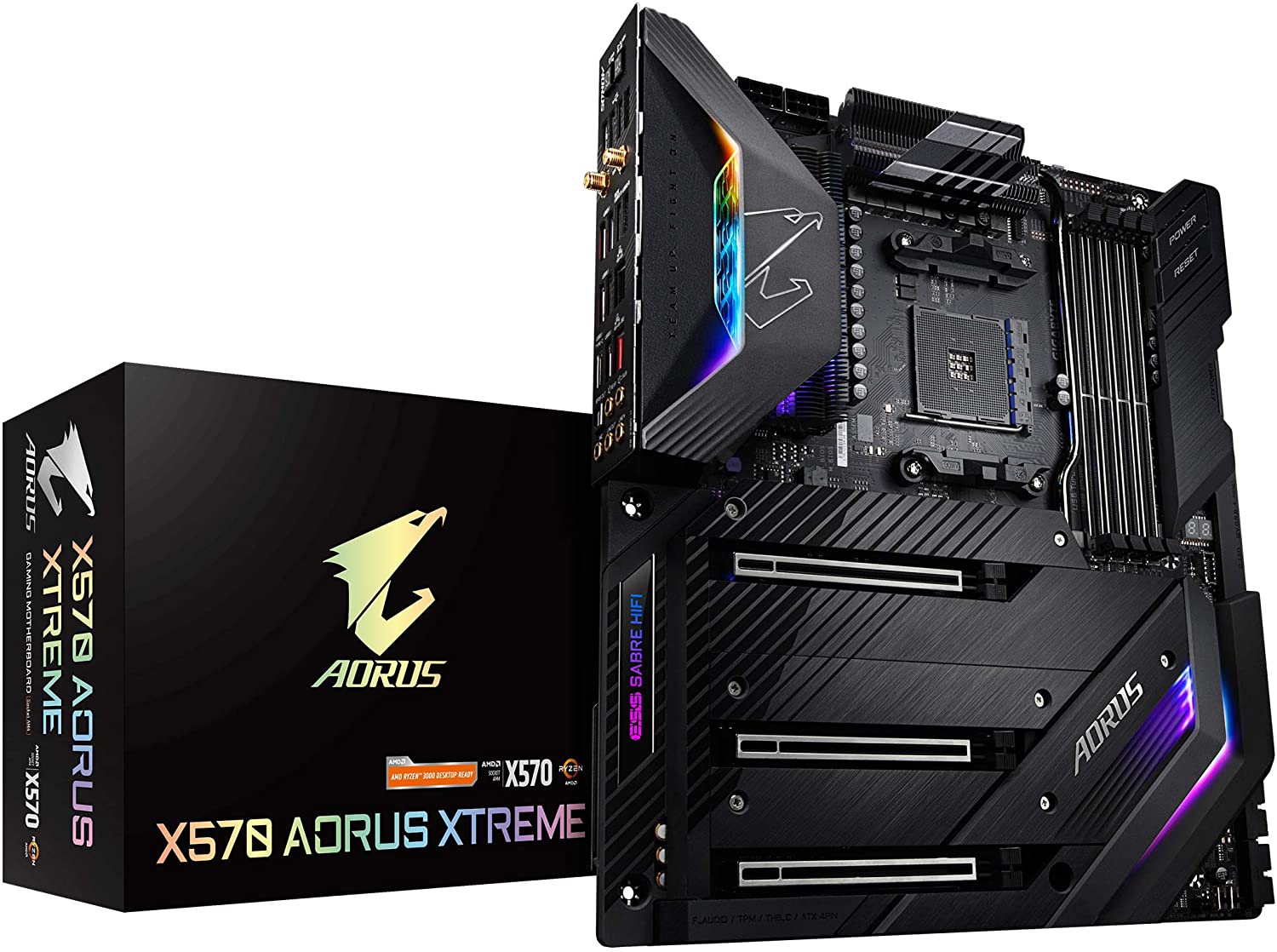 Additionally, unlike the other X570 motherboards, this one doesn’t feature one of those marmite active chipset cooling fans, which is not much supported by many of the PC builders.

If you plan on overclocking the Ryzen 9 390X to an extreme then, you don’t have to worry while selecting this board as it has two 8-pin power connectors.

However, if you don’t need the two 8 pin setup then you can either use one 8-pin connector or can go for one 8-1 pin and one 4-pin setup. 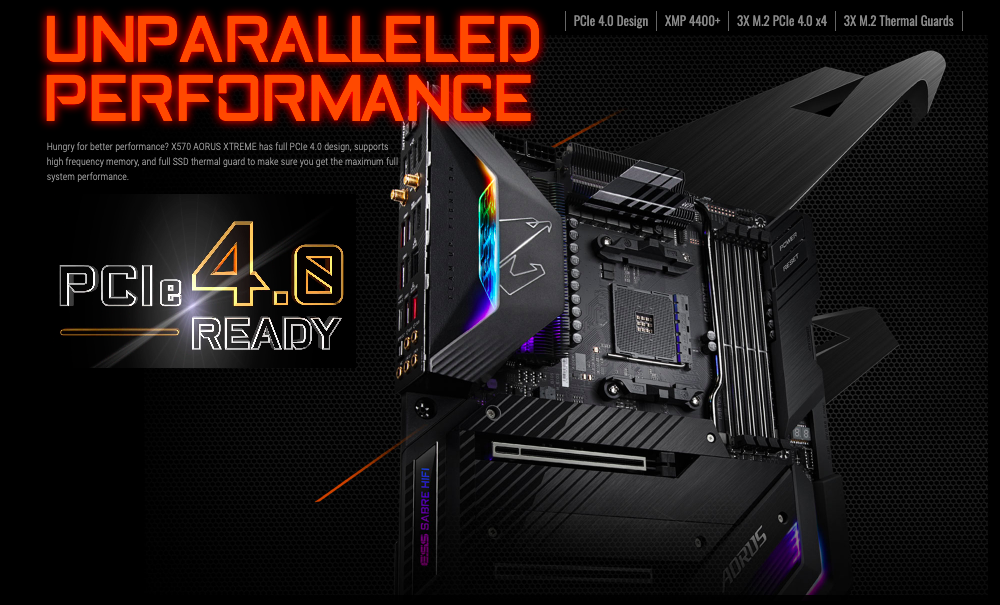 When you talk of features, this motherboard has everything you can expect from a flagship X570 motherboard for the Ryzen 9 3900x. It is loaded with features like 10 GbE LAN, WiFi 6, external clear CMOS buttons, along with Dual BIOS and socketed BIOS chips. 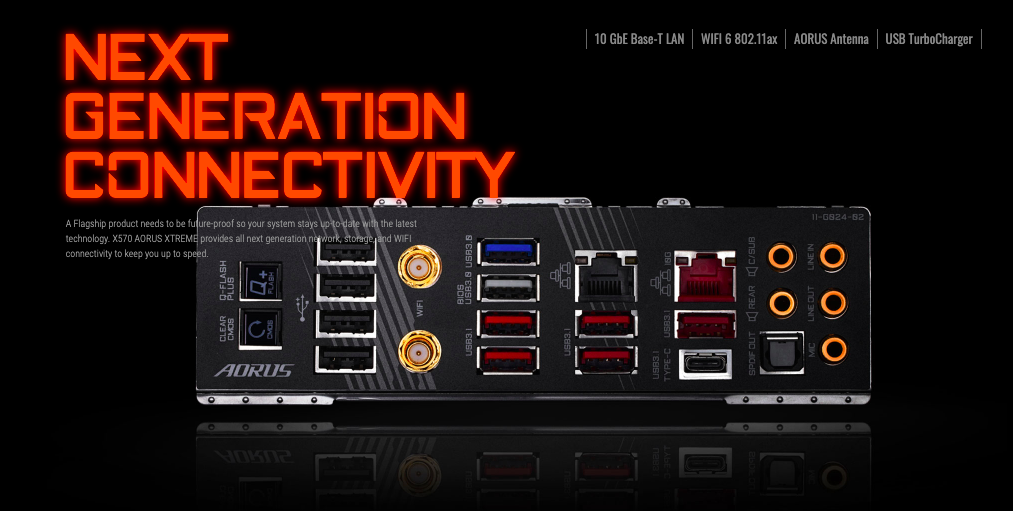 This Gigabyte X570 AORUS Xtreme is a bit dearer at USD 700 but is worth every penny invested in it. It is also the best Flagship and enthusiast  X570 motherboard available in the market.

Moreover, if you are a person who is building a PC setup with a ‘money is no problem mindset’, then this one is the mainboard you have been looking for.

The name ASUS is enough to tell you all about the product that we are going to talk about. This X570 motherboard from ASUS is for those who cannot compromise on even a small factor of the mainboard, no matter the cost. 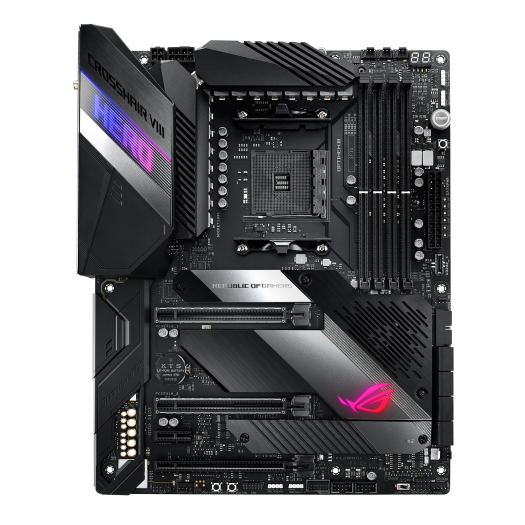 See, most experts have said that nearly most of the X570 motherboards, like the ASUS ROG Crosshair VIII Hero, MSI Meg Ace, Gigabyte X570 AORUS Master, and the ASRock X570 Taichi among many others are more or less similar.

These X570 motherboards have pretty much equivalent specifications and VRM quality (overkill functionality basically) on paper. They also say that pick any and you won’t be picking the wrong one.

This means that a large section of the X570 is more or less similar to each other.

So, what are the factors that made the ASUS Crosshair VIII Hero WiFi so special that it got a slot in our TOP 5 list? 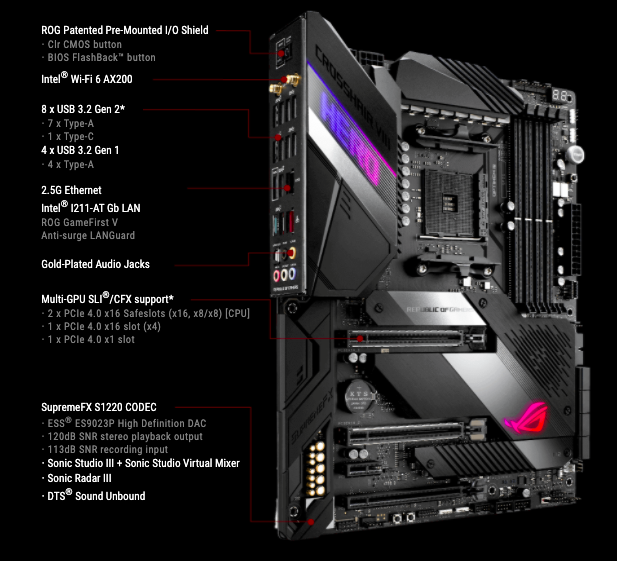 The only answer to that question is a very optimized, user-friendly, and convenient BIOS, that can tweak the Ryzen 9 3900X to its full potential.

ASUS Crosshair VIII Hero WiFi is indeed a great-looking motherboard and we cannot question its looks since it is from a company that is highly concerned about the hardware aesthetics and presentation.

It comes fitted with a mammoth VRM heatsink supported by an active cooling chipset heatsink. The Crosshair VIII Hero WiFi also features a dual M.2. with the PCIe 4.0 standard, along with 3 full-length PCIe 4.0 slots.

The storage support on this mainboard is also commendable as it has  8 SATA ports, dual M.2. with dedicated heatsink and cooling zone, as well as 4 DIMM slots for up to 128GB of RAM. 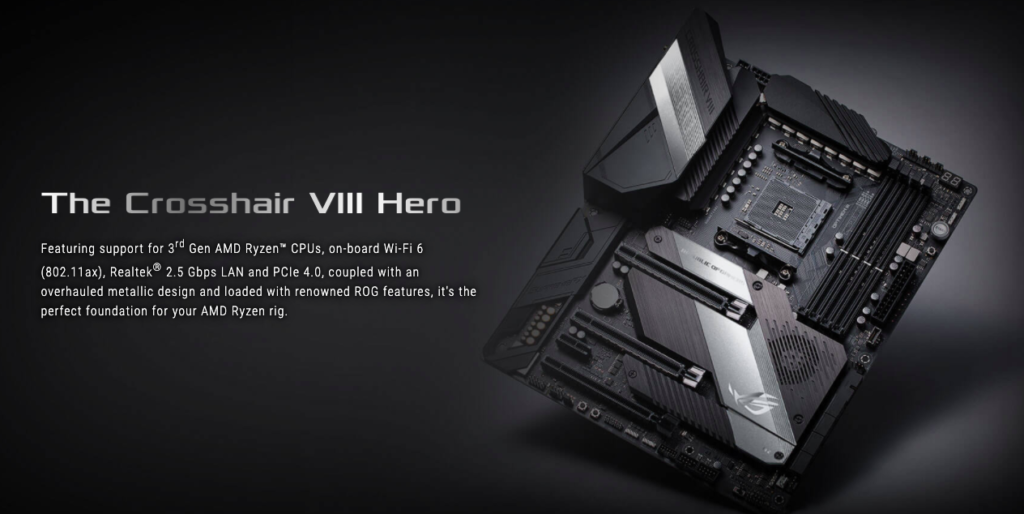 The best part about this motherboard is it utilizes WiFi 6 and 2.5 GbE internet, the latest wifi technology by intel, for seamless internet connectivity.

So, not all of us have the privileges to have the top-end components to build our gaming PC setup.

So, if you are among those who prefer a Compromise CPU like the AMD Ryzen 9 3900X. But you have limited resources and are a bit tight on the budget for the Mainboard. If that is the case you don’t have to worry, we have something for you as well.

The MSI B450 Gaming Pro Carbon AC is the best motherboard for Ryzen 9 3900 in 2021 for a budget gaming build sound this processor. 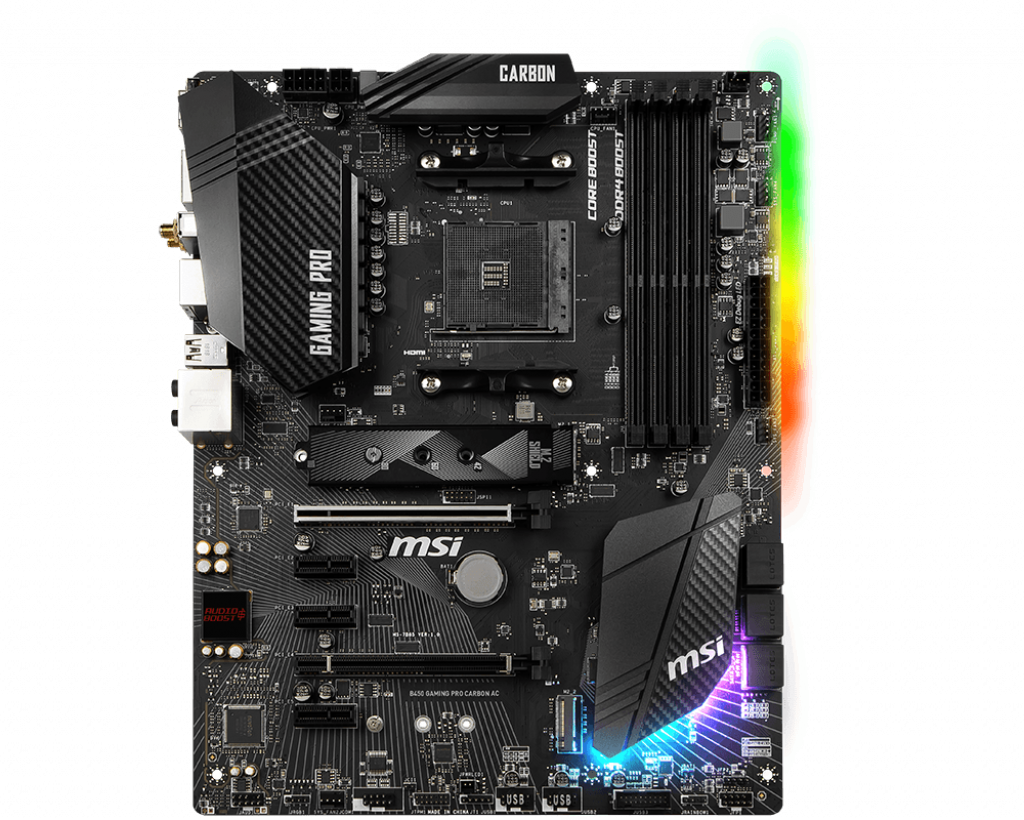 Since we have already considered you are a bit tight on budget for the mainboard, we will assume that you cannot most unlikely go for the new PCIe 4.0 NVMe SSDs that the new Ryzen 9 3900X and X570 motherboards can support.

Hence, we will suggest you a B450 Chipset-based motherboard for your Ryzen 9 9300X. Not only it efficiently supports the 3rd generation of Ryzen processors (Ryzen 3000 series) but also offers fantastic value to your money.

It provides you with a feature-rich, performance filled and powerful VRM fitted Motherboard to utilize the Ryzen 9 3900x in totality.

You must be thinking, that ok even if someone agrees to go for a B450 Motherboard, which one should he/she go for?

So, after our research and analysis, we concluded that as a motherboard with B450 Chipset, the MSI B450 Gaming Pro Carbon AC is the expert-recommended budget-friendly best motherboard for your AMD Ryzen 9 9300X.

The MSI B450 Gaming Pro Carbon AC despite its lower price value does not compromise on the feature and performance part. This MSI motherboard is well designed and can handle all the performance and power requirements of the Ryzen 9 3900X.

Additionally this MSI B450 Gaming Pro Carbon AC motherboard, according to our analysis, has the best VRAM that a mainboard on the B450 chipset can offer.

So all in all this motherboard with a B450 chipset and some top-class features is still a good pick and choice of many over the expensive motherboards built on the X570chipset.

Not much popular currently, but to our surprise, if you are a fan of the small ATX form factor, then you have to go for ASRock. WHY? Because it is the only computer hardware-making company at present that is making a Micro ATX motherboard for the AMD Ryzen 9 3900 X.

You can get the ASRock X570M Pro4 for your top-end AMD processor as a Micro ATX motherboard. 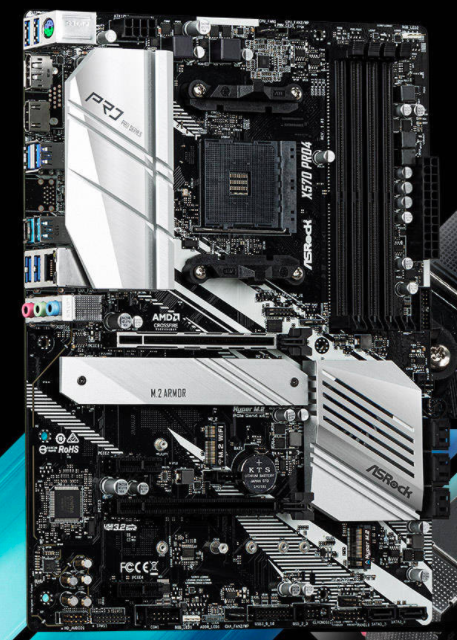 Additionally, it has Type C I/O ports too. However, by calling it the only micro ATX board we meant that it is the only Micro ATX motherboard for the Ryzen 9 3900X, that features the latest PCIe 4.0 and features a BIOS update facility too. 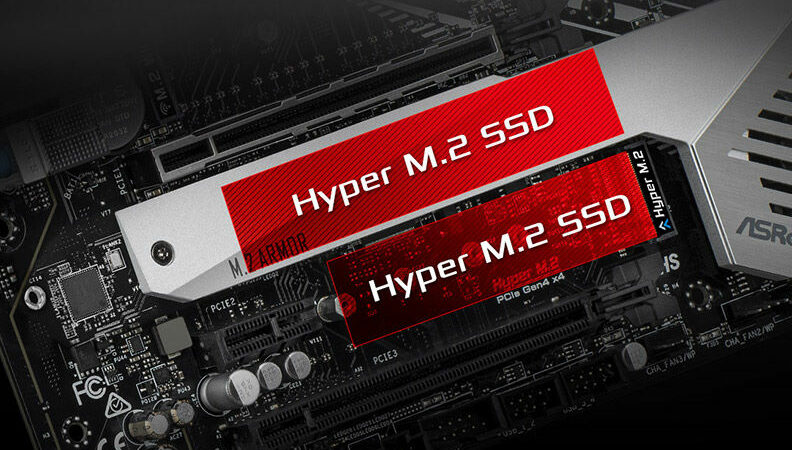 Since it is a small motherboard, it looks quite elegant. With the ASRock X570 Pro4, you can literally go for a comparatively smaller cabinet without compromising much on the performance and delivery part.

With this board, you can give your set-up a very elegant look, which obviously is something that made you go for a smaller form factor.

(However, we assume that you must have done your homework before going for a smaller form factor over the larger one.) You can get Best white motherboard.

There are only three Mini-ITX mainboards that have been announced for the X570 Chipset. Out of these three, you will be able to purchase only two, as only two of them are available at retail shops or online for sale.

The Gigabyte X570-I AORUS Pro WiFi on the Mini ITX Form factor is the one that is recommended and if we were to pick one in this form factor, it would be the one mentioned just above. This motherboard promises a 6-phase VRM on paper along with 70A power stages. 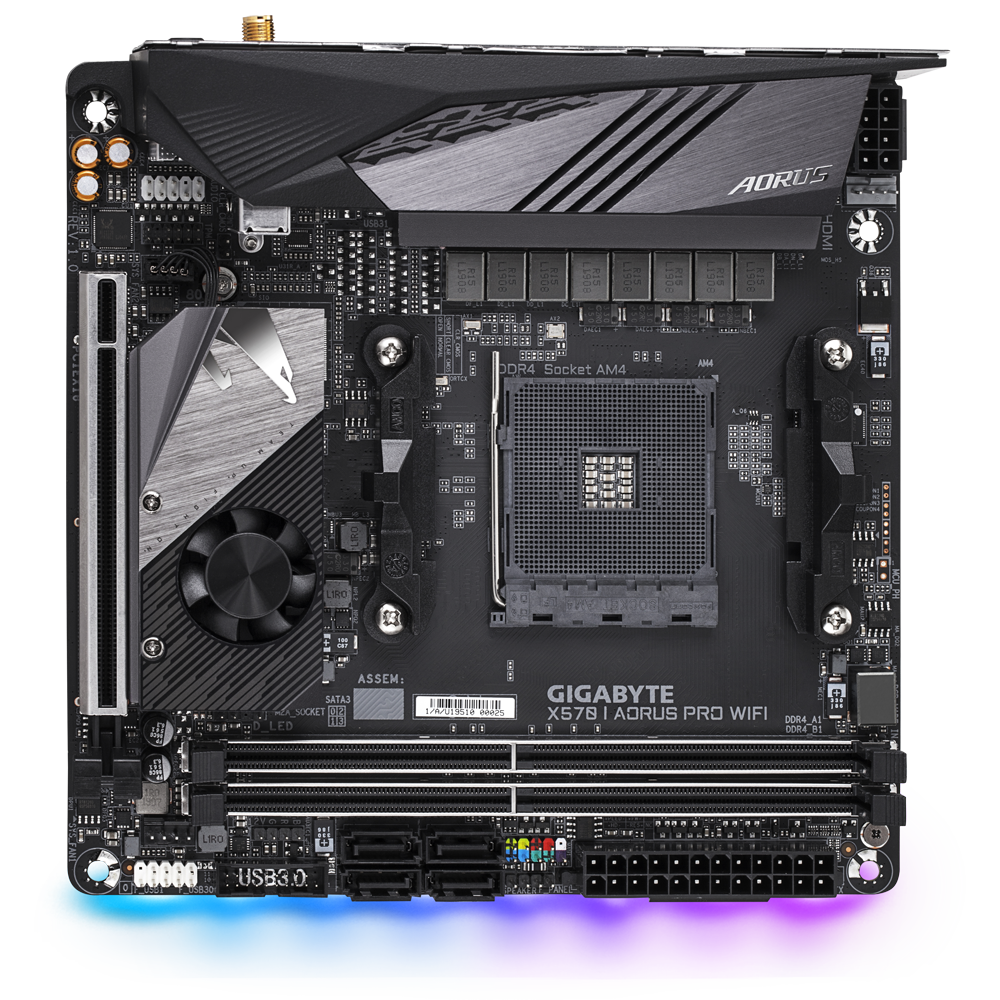 The other features like the connectivity and performance of this board are commendable.

This motherboard is considered as one with a super VRAM quality in a mini ITbX mainboard.

The critics suggest that the VRAM in this board is even better than the ASRock Phantom ITX and ASUS ROG Strix X570-I Gaming ITX.

We do not doubt that you might be fully aware of the quality and service of Gigabyte.  Basis the above-mentioned facts we can consider that this mainboard is a highly recommended one for your Mini-ITX based CPU.

Also, since with this board you will have to go for an SFS system, the VRM performance will become a critical factor and hence Gigabyte X570-I AORUS Pro WiFi is a perfect choice.

The AMD Ryzen 9 3900X is a beast from AMD and no Doubt that if you are opting for this as a processor, then you must go for a good motherboard without compromising on any aspect. It is highly advised in the computer hardware setup scenario that a balanced Setup is much more stable and long-lasting than the one that has variation in the output of different components.

So, it is highly advised that you go for a top-end motherboard to complement your Ryzen 9 3900 X for a stable, lasting, and qualitative performance at gaming. You can choose one from the top 5  that we have mentioned above.

Make sure that you keep reading more of our article, to enhance your gaming knowledge and insights. However, if you loved the article feel free to tell us about it in the comment box below.

Best AMD Graphics Card in 2021: Why Nvidia Rival is Suddenly the New Favourite For Building PCs?