Picking up an assault rifle can be tricky because there are many types and many variations for this class of weapon. They are the most needed weapon to face your enemies. There are fast-firing rifles like M13 and Kilo141 and there are many hard-hitting rifles like oden and scar. You can make the best out of these rifles by building these up from the warzone loadout. Here is the list of all the best assault rifles in call of duty: warzone. These are the best and recommended rifles that you can look for while playing. We have chosen the best for you according to their functions, target hitting, damage dealing, and much more. We have considered their mag size, rpm, reload time, and recoil. We will be talking about these rifles in detail. If you are a COD player, you might want to know shroud’s cod settings to level up your gameplay. Here you can read all the important shroud’s settings.

The first in the list of best assault rifles in the warzone is M4A1. You must have this gun in your loadout. This gun has an RPM of  833. Because of the increasing RPM, there are chances that the recoil will increase and you may miss some of your shots. But it has a great damage capacity, so if you are aiming correctly, it will definitely provide a lot of damage to your enemies. There are many pro players who use this gun in their loadout. It has a reload time of just 1.39 seconds which is quite low. Since the recent update, this gun has been nerfed but it can still be considered as one of the best assault rifles in the warzone and can be proved better than many rifles. 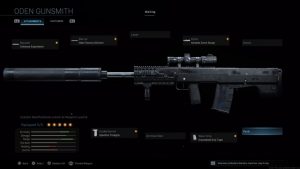 Oden is a Flow firing gun which if aimed correctly can tear your enemies apart. It has great damage output. It has comparatively low rpm and a low mag size of about 20 bullets but is one of the best assault rifles. It can be best suited for the close range combats but if you are using it for a long range battle then you might have to reload it again and again. It definitely has a long reloading time and high recoil, but if you know how to aim correctly, you will be loving this gun.

Everyone must have this gun in their loadout. It is the most brutal assault rifle among the others. It has an RPM of 750 which is definitely less than some of the best Assault rifles but it has very low recoil which makes it everybody’s favorite. Due to the low recoil, it has great damage capacity. The reload time of this assault rifle is just 1.32 seconds which is great. It is a great rifle for even enemies in your long-range. Even if you have not customized it, it can still damage an enemy who is 100 meters away. When you use it with the best loadout, there is no better rifle than this one.

The next rifle in the list of best assault rifles is KILO 141. It is considered to be one of the most accurate and the most precise assault rifles in the warzone. This gun has a fire rate of 750 RPM. It is almost similar to Grau 5.56 and M4A1 but due to its slow movement rate, it is not preferred over them. The DPS rates of both Grau and Kilo are approximately the same but still, Grau has an upper hand over this rifle. It has a mag size of 30 bullets which is almost the same as others. We will recommend attaching a full 100 mag to this gun, you will have a lot of chances to wipe out the whole opponent squad with this gun.

The last in this list is M13. This is most preferred by the players because it provides almost the lowest recoil. Like other rifles, there are some downsides of this rifle too. It has a fire rate of 900 RPM but if you check the damage rate of this rifle, it is just 360 which is much lower than many other rifles present this list. You can not consider it to be the deadliest rifle in your loadout but it will still manage to provide a lot of damage to your enemies. Many pro players like shroud use this rifle in his loadout. So we can say it is worth having in your loadout.

There are many other assault rifles present in the game. You can try each of them and customize them according to your needs. There are some things that you need to keep in mind before which one to choose like the mag size, DPS, RPM, and much more. These were the best in the warzone. You must keep any of them in your loadout to increase your chances for the win. If you are looking for a lightweight gaming mouse, you can read our light mouse article. You will get the best options there with their detailed features and much more.

No doubt, M4A1 is the best assault rifle in the warzone. Other than this, MP5 is also a good competitor to this rifle. MP5 belongs to the other weapon category but still, it is considered to be a good competitor the M4A1 rifle. These two are the most used and preferred by all the professional players.

Both the rifles are one of the best rifles in the warzone. Because of the high damage rate of M13, it can sometimes be preferred over M4A1. M13 can be preferred only for long-range targets. It is not much suitable for the targets who are in close range. It has a slower rate of fire than M4A1.

Oden has approximately double the damage output than every single bullet of M13. It is best for close-range targets and the velocity of the bullet is much better than the previously available rifles. It has great damage power.

Kar98k, SKS, ARX-50, HDR are some of the best snipers in the warzone. ARX-50 is considered to be the best sniper because it has the capability to damage the opponent completely if shot on the head.

TinyTask: Best Way To Record Your Games (Download, Install, & How to Use)

TLauncher: Manage Multiple Apps Through One Launcher (Download & Use)

Know Everything About CPU-Z ( Benefits, Use, & More)

TinyTask: Best Way To Record Your Games (Download, Install, & How to Use)

TLauncher: Manage Multiple Apps Through One Launcher (Download & Use)

HWMonitor:  Monitor Everything in Your PC Easily

Know Everything About CPU-Z ( Benefits, Use, & More)